Ubisoft Reveals That ANNO 1800 Has Already Sold Over A Million Copies; Three New DLC Are on the Way

It turns out that last year's Anno 1800 is quite a sleeper hit, as Ubisoft has proudly announced that the Blue Byte–developed strategy game has more than a million players, becoming the fastest-selling entry in the long-running series.

"I have waited for a long time to be able to say this - thanks to many of you, #Anno1800 has reached more than a million players last December, making it the fastest selling game in Anno's 21-year history," Brand Manager Marcel Hatam said on Twitter.

As revealed by Ubisoft, three major expansions are coming to Anno 1800 in 2020 with the Season 2 Pass, and the first one, titled Seat of Power, arrives on March 24. According to the French publisher, "it gives players of the city-building sim the ability to create a palace as a symbol of their city’s might, along with government departments whose policies can boost the city’s economy."

The Seat of Power DLC will be followed later this year by Bright Harvest, "which lets players add tractors and other mechanized tools to boost the efficiency of their farms." As for the third expansion, gamers will "ally with an emperor on the Southern continent and bring irrigation to a desert" in Land of Lions.

The aforementioned Season 2 Pass is currently priced at $24.99. If you're interested in playing Anno 1800, a free weekend with the title will kick off on March 12, giving everyone the chance to download the critically acclaimed real-time strategy game from Uplay or the Epic Games Store, and try it for free through March 15.

While we're waiting for more details on Anno 1800's future, take a look at its latest trailer down below:

I have waited for a long time to be able to say this- thanks to many of you, #Anno1800 has reached more than a million players last December, making it the fastest selling game in Anno's 21-year history. 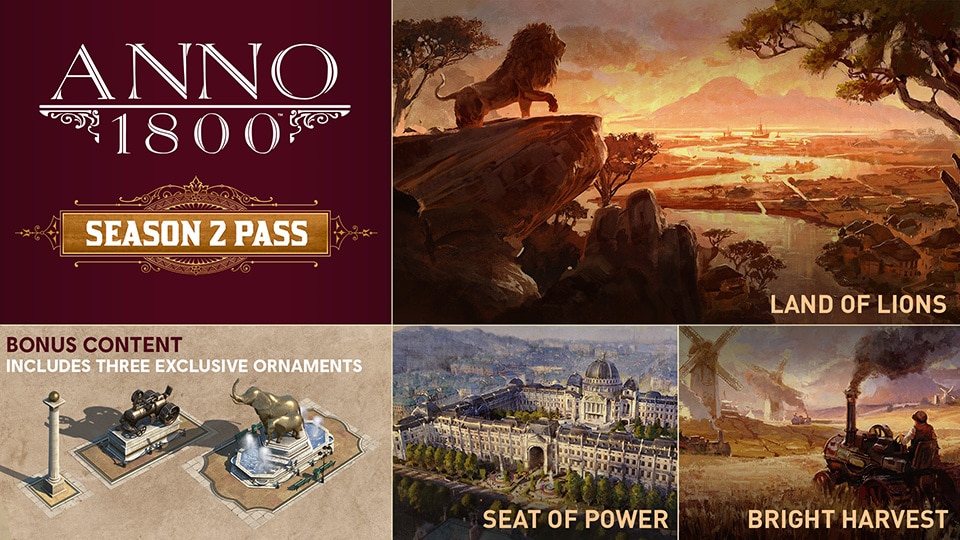 Welcome to the dawn of the industrial age. The path you choose will define your world. Are you renovator or exploiter? Suppressor or liberator? It's up to you how the world will remember your name. In Anno 1800, players will take charge of their own fortune as they navigate the rapidly evolving technological and malicious political landscape of the 19th century in their quest to build an empire that will stand the test of time. Combining beloved features with innovative gameplay in a memorable new setting, Anno 1800 marks the beginning of a new era for the Anno franchise.

Anno 1800 is currently available on PC (via Uplay and the Epic Games Store).